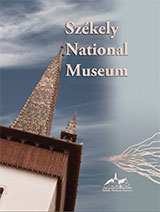 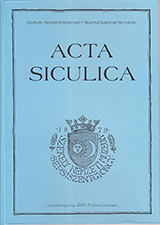 The 1870s: the first presence of the museum founded by Emília Zathureczky – Cserey Jánosné and Gyula Vasady Nagy at an international scientific event (The 8th International Congress of Prehistory and Anthropology, Budapest); the starting of fieldwork and publishing of sources; moving from Imecsfalva to Sepsiszentgyörgy.

The 1880s: The Hungarian Academy of Sciences publishes the Apor-Codex, with the psalms of the first Hungarian translation of the Bible (a part of the fourth eldest Hungarian literary work), discovered by Vasady; Géza Nagy points out the question of the origin of Székelys relevant even in our days; the beginning of professional archaeological research, the research of mediaeval murals, and of historical migration.

The 1900s: The Universal Exhibition from Paris; the ethnographic–natural-scientific–historical activity of the great teachers–museologists of the Székely Mikó College; the involving of students (e. g. the later outstanding graphic artist Lajos Varga Nándor); the political and professional contribution of the mayor of Sepsiszentgyörgy, Ferenc Gödri; the beginning of the world famous prehistoric archaeological research of Ferenc László.

The 1910s: the museum moves to its own place in the buildings designed by Károly Kós; museologist Lajos Roediger from Zombor (Serbia) joins the institution; continuing the fieldwork in the Székelyföld; Jenő Gyárfás starts organizing the art gallery within the new building; founding of the Székely National Archive; its specific jurisdictional status (autonomous organization) makes it possible to remain in the possession of the Székelys.

The 1920s: it remains the only Hungarian scientific institution outside today’s Hungary; recognition from the Romanian sciences and politics; the ethnographic exhibition from Geneva; the concert of Béla Bartók in Sepsiszentgyörgy; the first research with phonograph by the Moldavian Csángós (Pál Péter Domokos); the 1929 Yearbook including the preparatory works for a monograph on Székelyföld; the last sentence uttered by Elek Benedek, addressed to the museum: “The most important thing for you is to work!”

The 1930s: The projects of Vilmos Csutak – the first Hungarian open air museum; research expeditions focusing on natural sciences in Székelyföld (together with János Bányai and Gerő Könczei), the second complex Hungarian regional research programme after the pre-war Balaton-research; the volume VIII of the Székely Records (with Samu Barabás); the first restoration of a monument carried out by a professional institution of the Hungarian minority (St. John’s Church from Csíkdelne, together with Géza Vámszer); the museum gets into its custody the only restored wealth in the interwar period within the countries outside Hungary, in exchange for the valuables of the Gozsdu Foundation in Budapest (the Székely Education Fund of Háromszék County).

The 1940s: the institution of János Herepei is the most well-financed regional museum, the only museum in Northern Transylvania with the status of a public collection (comprehensive ethnographic and archive research; the start of the renown ethnographer, Iván Balassa; Dénes Cs. Bogáts edits the first Transylvanian dictionary of documents, respectively an historical dialect dictionary, the inspiration for the latter Transylvanian Hungarian Dictionary of Lexicology); severe war loss at Zalaegerszeg; secretary Anna Fadgyas saves the non-evacuated material; the rearguard of the independent Hungarian museum–library system from Romania, under the command of László Szabédi (together with the Transylvanian Museum Society).

The 1950s: it is the largest regional Hungarian museum collection in the Carpathian Basin (half a million items) until the forced relocation of the archive; a pioneering role in the reconstruction of the museum system in Romania, a process under a strong ideological pressure, but also with experiments at the bottom level; the first exhibition of natural sciences in Romania organized around the theory of evolution; the first yearbooks (in Hungarian and Romanian) of a regional museum in communist Hungary and Romania.

The 1960s–1970s: hiring our own scholars, starting with Sándor Kovács, museologists in natural sciences, history, ethnography, arts, and their outstanding activity; through his archaeological research Zoltán Székely assures an international acknowledgement for the museum; the discovery of early mediaeval Hungarian burial places in Háromszék.

The 1970s–1980s: the enlargement of the buildings according to the original plans, founding the external units of the museum (the museums of Kézdivásárhely and Csernáton, the “Benedek Elek” Memorial House in Kisbacon, the Art Gallery in Sepsiszentgyörgy); expanding the open air museum as well (in Csernáton); Imre Baász organizes the exhibition of experimental contemporary art called Medium, which will become later an international event; the yearbook under the name of Aluta is the most important scientific periodical of the Hungarian minority.

The 1990s: the restoration of the permanent exhibitions related to the original character of the museum; reintegration into the Hungarian (in the case of the art gallery from Sepsiszentgyörgy into the international) art-cultural-educational institutional system; the autonomy, independence of the external units (being private property, the “Benedek Elek” Memorial House separates from the museum); institutional organization and research projects.

The 2000s: infrastructural development, including the expansion of the museum lands in Sepsiszentgyörgy; the opening of new units in Zabola and Barót; renewal of the permanent exhibitions of archaeology, ethnography and history; integrating museum pedagogy and an intensive editorial activity; bringing back the “copper cannon of Áron Gábor” from Bucharest; the restoration of the Apor-Codex; opening a new contemporary art gallery (the Magma hall) in the building of the art gallery from Sepsiszentgyörgy.

2015.04.28
On 1 April 2015 MAGMA Contemporary Art Space from Sfântu Gheorghe celebrated its 5 years anniversary. During these five years we have collaborated with around 250 artists, art theorists, philosophers, etc. and together we contributed to what MAGMA is today.[ details ]

2015.03.18
MAGMA Contemporary Art Space from Sfântu Gheorghe cordially invites you to the opening of the group exhibition Examples for Non-universal Chair on March 18, 2015 at 18:00. [ details ]

The geometry of water // Ágnes PÉTER

2015.01.15
On January 15, 2015 at 19:00 MAGMA Contemporary Art Space from Sfântu Gheorghe cordially invites you to the opening of the exhibition entitled The geometry of water by Hungarian artist Ágnes PÉTER winner of the first prize at the second edition of the International Graphic Art Biennial in Szeklerland.[ details ]

2014.12.17
SALON VIDEO and MAGMA Contemporary Art Space cordially invite you to the opening of the archive-exhibition salonvideo_SUBmissions.[ details ]

HOME – [a work in progress]

2013.01.19
Prints, Drawings and Photos from the Ethnological Archives[ details ]

2012.03.16
MAGMA Contemporary Art Space invites you to the opening of the exhibition entitled Master and disciple 4 of the artists Ilona NÉMETH and Jaro VARGA [ details ]

The Chair // Visual Encounters with Power

The black soup
A history of coffee making

2011.07.12
The commune Árkos and the Covasna County Capital, Sepsiszentgyörgy will host an extraordinary event: the ‘Spiral’ International Contemporary Art Symposium takes place here at the Training Center and the garden of the Szentkereszty Castle. [ details ]

A Demonic Disease: The Plague

2010.01.22
Our exhibition attempts to give an overview of the main events, effects and consequences of the greatest plague epidemic of European history, the Black Death, which first devastated Europe in 1347-1349. [ details ]
Cultural Heritage Days 2009